Hope Works was a small factory based at 137 Harvey Clough Road, According to a 1900 White’s directory, J. B. Rawlings and Son Ltd were dressing case instrument manufacturers but over time they became better known for making nail files and scissors.

In 1997, we wrote to Derek Bayliss at the South Yorkshire Industrial History Society, who kindly sent us the text below, which he wrote n the early 80s. 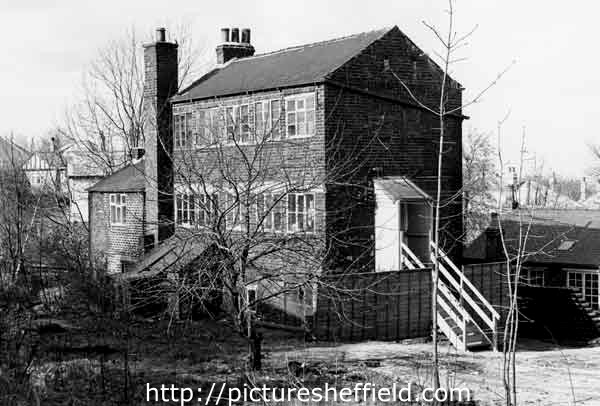 The industrial history of some large towns can be told in terms of one large firm, or a handful of firms. No doubt there were many smaller businesses, but they did not greatly affect the development and character of the place. In any study of Sheffield though, the small firms and the “little mesters” working by themselves have an essential place. In the cutlery industry they were part of a uniquely complex pattern of commercial relationships. The independent craftsmen and the owners of small firms were a distinctive group in Sheffield’s social structure. And while many of their workshops, around courtyards or in odd corners, have gone – some have survived to outlast the more modern factories of Richards and Viners.

It would be the work of a lifetime to unravel the stories of these buildings and the businesses that used them. Workshops have found other uses, memories have faded, and few records have survived. But when there is something to go on, it can be absorbing work to piece together the history of one of these small firms; and it can add another piece to the jigsaw of Sheffield’s industrial history.

So when I heard of a cutlery works in Woodseats that was awaiting demolition, and took a few photos of it, I soon found myself tracing its story through the old directories in the Local History Library. Sometime later I discovered that Don Alexander had visited it about 1973 when it was working and had kept the notes that he made then. From these sources I have put together this short account. My thanks are due to Don, and to the staff at the Local History Library.

Hope Works was at 137 Harvey Clough Road, off Derbyshire Lane in Woodseats. At the gate was a small brick cottage, no 139, which had one storey to the road but two at the rear, where the ground fell. The roof was slate covered, and the gables had been rebuilt in modern orange brick to put a room in the roof. The Works lay further back and lower down and was reached by a drive which had been paved with stone.

It was a simple rectangular brick building of three storeys, at right angles to the road. The main door was in the end facing the road, and was on the first floor, so perhaps two storeys and a basement would be more accurate. A flight of ten wooden steps, with a handrail on either side, led to the door, which was sheltered by a porch with a sloping wooden roof. There had been three windows in this end wall, two on the top floor and one next to the door but they had been bricked up. The two upper floors were well lit on the long sides, with five windows on each side of each floor, separated only by narrow brick pillars. The patterns of the windows varied, but some on the top floor with two sliding halves, each of fifteen small panes (5 x 3), seemed to be the oldest.

The roof was slated. There were two chimneys at the far end, of ordinary domestic pattern a single one projecting from the left-hand wall, and a double one just to the right of the roof ridge.

Beyond the chimneys at the far end was a small two-storey extension. There was a garden to the left of the works, and a small extension of the basement projected into this. To the right of the works the drive continued, under the beam of a 2 ton hoist, into a yard at basement level. There was a small door from here into the basement, and also a large double door projecting some way from the basement. Behind this an outside “back stair” led to a wooden balcony and round to a door on the middle floor at the far end of the main building.

A single storey brick workshop, including a plating shop, faced the works across the yard, and at the end was a further workshop which had also served as a garage. In the yard were some large stone blocks with iron pins, presumably bases for anvils or machines.

By the door was a stainless-steel plate “J B Rawlins & Son” but the works was empty and Saxtons had already sold it for redevelopment. It was cleared later in 1984 and has now been built on.

Don Alexander visited the works about 1973 and talked to the last owner, Jack Hawksworth, who had worked there for fifty years. He remembered as a boy collecting horse-muck which was put under the anvils so that the hand forgers did not suffer from dropped wrist. (Donald Hunter’s “Health in Industry” gives wrist drop, or paralysis, as a symptom of lead poisoning but among hand forgers it would be caused by repeated stress on the muscles, and the muck might relieve this by making the anvil more resilient.)

At that time the works was making a strange assortment of products to keep going – since the Second World War they had included scissors (some of them blunt-ended for the Prison Service), nail files, nit combs of nickel-plated brass, letter openers for UM Stationery Office, eyelet hooks for tying parcels for the Post Office, stainless-steel tiles for the Stainless Steel Tile Co, and triangular pins for BSC Rotherham. Before the War the products, all hand forged, had included ladies’ tweezers, nail files, glove hooks, pins and corkscrews. The works had also made their handles, using ivory, mother of pearl, tortoiseshell and stag horn.

I began by assuming that, like most small works in Sheffield, Hope Works had changed hands, possibly several times; and that its origins might have been among the farmer/metalworkers of the villages around Sheffield. But I was wrong on both counts.

According to Mr Hawksworth the firm was set up in 1859. It does not appear in White’s Directories for 1856 or 1860 but those for 1861 and 1862 record Joseph Benjamin Rawlins, “dressing case and instrument maker”, at Prospect Terrace, Steel Bank. New firms often do not appear in the directories for a year or two, so this is compatible with a start in 1859. The firm’s origins were thus in Sheffield and from the start its products were those that it still made in the 1930s. The directories of the mid 19th Century give dressing case instruments as a subhead of corkscrew manufacturing, which itself is one of the specialised sections of the cutlery industry. At first Rawlins evidently also made the dressing cases themselves, but the directory entries do not mention this after the early 1870s.

By 1864 Rawlins was at 7 Spring Lane (i.e. Broomspring Lane) and in 1868 at 51 New George Street, which was the Truss works of Joseph Gray & Co, surgical instrument manufacturers, but,also in the Sheffield tradition, housed three other small concerns besides Rawlins.

Woodseats first comes into the story in the 1868 Directory, for Rawlins’ home address is given as Derbyshire Lane. At his first two addresses he had probably lived and worked at the same place, but of course he could not do so at the Truss Works.

Harvey Clough Road first appears in the next Directory, for 1871-2, which gives Rawlins’ home address as Oak Cottage in that road. He still worked in Sheffield but had moved again to 2 Union Lane. The 1:2500 Ordnance Survey map of 1875 shows Harvey Clough Road and the parallel Mount View Road lined on both sides with small plots of land, some containing buildings and some not. This suggests that they were laid out about 1870 and the land sold in small units as building plots. Indeed the 1868 entry might mean that Rawlins had already moved to the new cottage, but that Harvey Clough Road did not yet warrant its own entry in the Directory.

To us, familiar with the zoning of some areas as residential and others as industrial, it may seem strange that Rawlins could set up his works in a new residential area. But there was nothing unusual about it in the 19th Century. The firm was in a light trade which did not “create a nuisance” in legal terms, and presumably the plots of land did not carry any covenant against trade or industry, so the works could be built even among the detached houses of Harvey Clough Road.

We do not have an exact date for the building of the Works. The 1871-2 Directory implies that the house came first and the Works afterwards. Mr. Hawksworth thought the Works was built about 1869. The main block was certainly there by 1875, when it appears on the 1:2500 map. At this stage there was no extension (which Mr. Hawksworth dated to around 1913) or outbuildings (probably even later) though by the end of the 19th Century there was a workshop on the site of the garage. The name Hope Works also first appears on the 1875 map which describes it as “Cutlery Works”.

The 1881 Kelly’s Directory first describes the firm as J B Rawlins & Son, the name it kept for the next hundred years. It continued to be described as “Dressing Case instrument manufacturer” until the Second World War, though corkscrews are also sometimes mentioned; and the fuller description “manicure and dressing case instrument manufacturers; also button hooks, shoe lifts and paper knives” is found in the 1920s and 30s. The size of the workforce was stable: about 30 in the 1890s and about 20 in the 1970s.

Kelly’s Directory for 1940 describes the firm as “manicure and dressing case instrument manufacturers, and flexible nail files”. The nail files only appear until the 1948 Directory. The 1944 and 1951 Directories (but not the 1948 one) mention surgical instruments. 1951 is the last time that dressing case instruments are mentioned in a directory entry, and the first time that scissors appear. From the next Directory in 1954, the firm is described simply as scissors manufacturers, with no attempt to reflect the variety of products noted by Don Alexander. This is no more than an outline of the story of the firm and the works, put together from a few sources of information. But it illustrates some typical features of Sheffield’s small cutlery firms – the origins and the specialised skills, and the search for new products when the market for the traditional ones disappeared – and some less usual aspects – the move to a purpose-built works then well outside the city, and the survival almost to today, when so many other firms had already been closed or been taken over.

I hope it will encourage other people to try their hands at retracing the history of similar firms.